A selection of recorded interviews with some of the world's most prominent neuroscientist in a musical and poetic interpretation of the latest scientific knowledge about consciousness, death and electrical cascades into the collapsing brain.

"After the heart has stopped beating, the activity in the brain increase to something like full alertness for several minutes. Nobel laureate Arvid Carlsson wonder if that time can be experienced as an eternity."

A chamber music concert about the death by the composers Jonas S Bohlin and Johan Ullén. Text and recitation Lotta Erikson.

People who experienced the so-called near-death experiences describe similar experiences regardless of culture, religion or descent. Feelings of harmony, euphoria and well-being are predominant.

In this project, we highlight this topic by asking the hardest questions to some of the world's most prominent neuroscientist.

Lakhmir Chawla critical care physician and professor of nephrology George Washington University Medical Center, Washington, DC (the one who first discovered that brain activity reaches a peak after the actual moment of death)

Susan Blackmore writer, lecturer, sceptic, broadcaster, and a Visiting Professor at the University of Plymouth.

All interviews are made by science journalist Lena Nordlund

Lakhmir Chawla explains that the electrical activity can be near zero for more than a minute before it starts to rise to a final crescendo. A possible explanation for this phenomenon is that the lack of oxygen makes the nerve cells can no longer maintain the normal voltage across its membrane. When a large number of neurons fires a final result would be able to be a cascade of electrical activity.

Nobel laureate Arvid Carlsson points out that we know very little about the mental state that can exist in the brain, and how they related to what we call reality.

Dreams and wakefulness are different states, but there may be many more, he says. He speculates that we may be able to experience something that has no time aspect at all, a condition of the collapsing brain completely decoupled from the experience of time. And what is that? It's eternity. Right? It may well be that while we are on the way out, so to speak, just when we experience an eternity. And when we experience after it forever, says Arvid Carlsson. 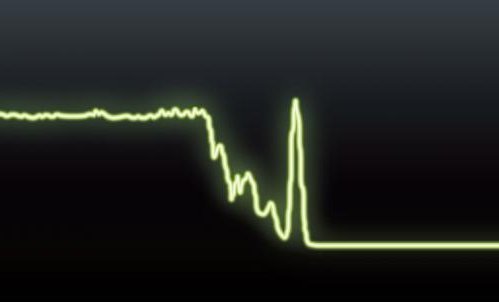 Throughout the ages, man has made himself beliefs about death. The end we are all so painfully aware. What can modern science tell us about death? Is the so-called near-death experiences something that the brain produces the transcendent state between consciousness and clinical death? Can our consciousness be separate from our brain?

A musical and poetic interpretation of the latest scientific knowledge about consciousness, death and electrical cascades into the collapsing brain.

• A selection of recorded interviews with some of the world's most prominent neuroscientist played between musical compositions by Johan Ullén and Jonas S Bohlin. Lotta Erikson recites the text based on the interviews. Sometimes with music in the background.

• The music is inspired by the variety of topics that the text describes.

• The music alternates between being in focus / foreground and more backing to the spoken text.

• Music and lyrics creates a dynamic between the clinically scientific and emotional musical expression. 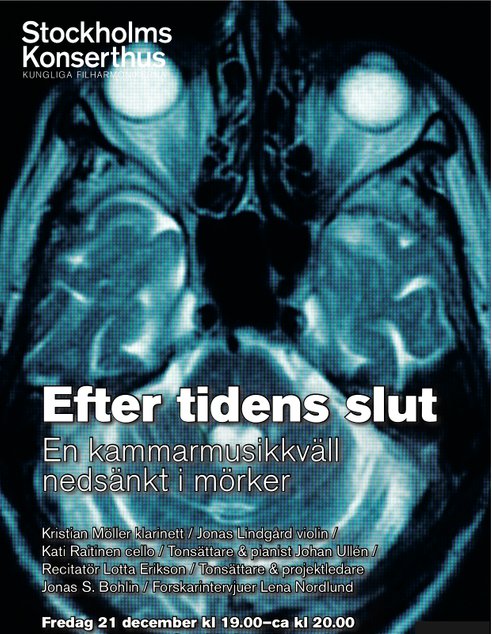 • Vetenskapsradion, P2 Live, Stockholm Concert Hall with the support of the Arts and the National Music Works.